We've Got You Covered

The term “armyworm” can refer to several species, often describing the large-scale invasive behavior of the species’ larval stage. The armyworm’s diet consists mainly of grasses and small-grain crops such as corn, but the species has been noted to consume over 80 different plants.

Destruction can happen almost overnight, because the first stages of a caterpillar’s life require very little food, and the later stages require about 50 times more. Because of this rapid change in food consumption, the presence of larvae will not be noticed until they have destroyed almost everything in as little as a night. 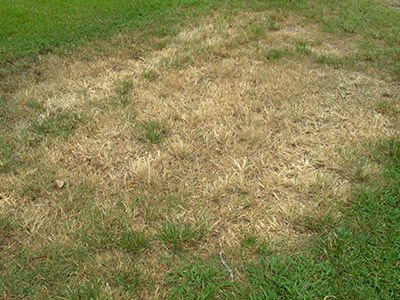 If you see small white “egg-shaped” structures on the back of the larvae head, it could mean that they are infected with parasitic fly eggs. Eventually, the larvae will die but it doesn’t mean that all the colony has been infected.

Regardless of the death toll of the armyworm colony, it still means that you have a destroyed lawn and hundreds — maybe thousands — of death larvae on your lawn. Of course, other animals will detect the dead colony and make the devastating loss of the colony their next feast. This probably would not be a problem if it wasn’t for the fact that some of the animals that dead larvae attract are less than desirable. For example, birds, rodents, and other insects will find your lawn and make it their own banquet hall. And, while they stay on your property, they tend to be poor guests and will destroy everything else on the way out of the feast. For example, birds can leave droppings all over your property and other animals could threaten your pets or small children.

One of the best ways to combat armyworms is to contact a pest control service. If you see little larvae growing in your lawn, it is best to contact a professional pest removal service right away. Why? Well like stated above, eventually those little caterpillars will get hungry and destroy your lawn. If you remove the larvae before they fully develop, you could save your lawn before they attack it.

Contact us today for our lawn worm removal services!

When it comes to your home, pests should be the last thing you worry about. We provide professional, efficient, and lasting results with no hassle!

Our fertilization and weed control services are top notch. Our goal is to keep your outdoor living green and flourishing for you to enjoy all season long!

Fungicides are used together with pesticides to help protect your plants. We offer a wide variety to keep your plants healthy, happy, and thriving!